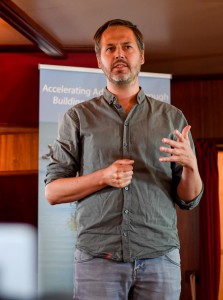 Fokko van der Goot holds a MSc in Environmental Science from the University of Southampton, United Kingdom. Since 2007 he works for Boskalis’ inhouse Engineering Department Hydronamic Project Engineer within the Marine Environment and Morphology group. In this role, he has worked on various large international dredging projects, such as the Khalifa Port Project in Abu Dhabi, UAE, and Ichthys Gas Export Pipeline project in Darwin, Australia. Since 2016, Fokko is, on behalf of Boskalis, part of the EcoShape management team that coordinates the Building with Nature program. He is program manager of the Knowledge Programme Marker Wadden, Pilot Houtribdijk and Building with Nature Indonesia.